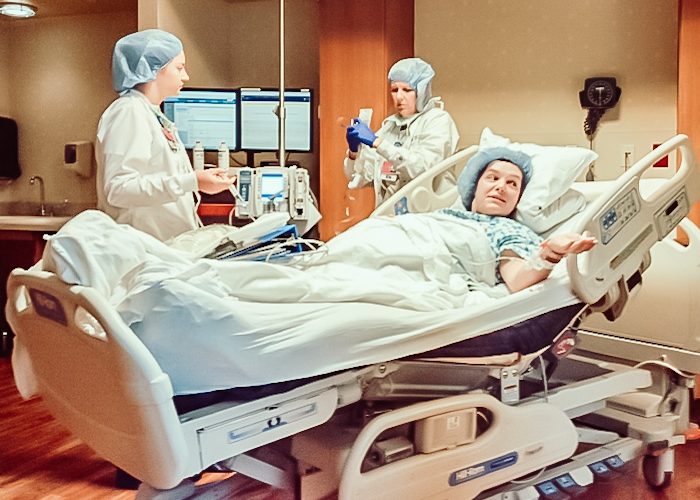 So often the first thoughts that come to our minds when we first find out that we are expecting is how we will deliver our baby. Will we plan a home birth, have a doula, a midwife, a hospital delivery with epidural or maybe drug free or even a scheduled cesarean? The options are almost endless, and can be so overwhelming. To make matters worse, one of the first questions your doctor may ask you once they’ve confirmed your pregnancy is, “Have you given any thought into a birth plan?”

During my first pregnancy, I was shocked at my 12 week appointment when my doctor asked me that very question. I mean, I had given thought to it, but I didn’t realize it was going to be put in my file that early in my pregnancy, before I barely even had the slightest of bumps showing. 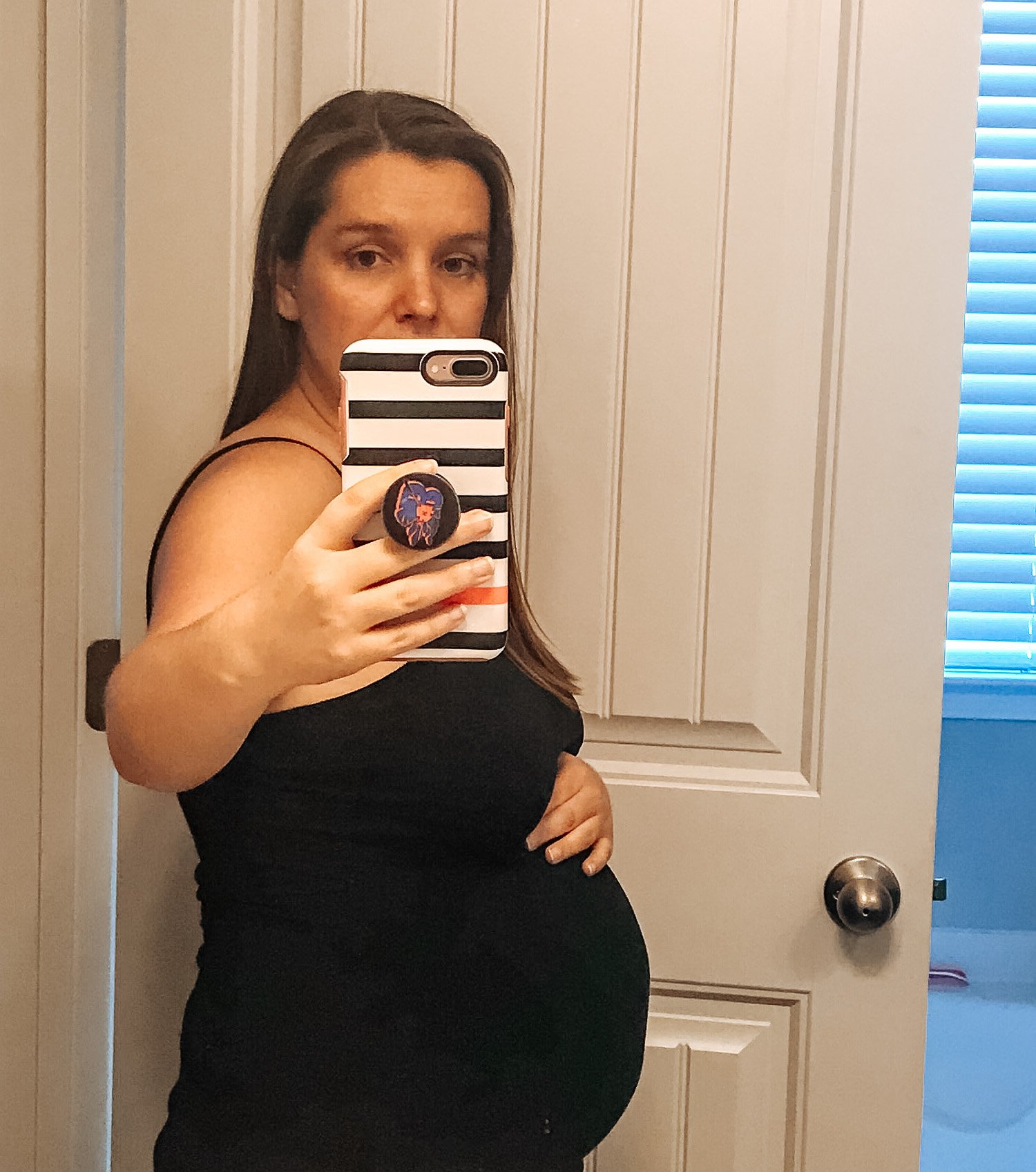 Around 15 weeks I started having heavy bleeding. This was not the first time during my pregnancy that this had happened, to read more about my twin pregnancy click here. This time was different though, this time I was advised that one of the babies’ positions wasn’t in the best spot and that it was causing me to have excessive bleeding. They told me that I had to be careful as often times this could cause premature labor. If you read my blog about my twin pregnancy, you know that this doctor didn’t have the best bedside manner. He not so empathetically informed me that because of where I was in my pregnancy they wouldn’t do anything to help me.

I was sent home and told to followup with my own doctor, who informed me that both the babies were showing healthy and strong and that their position was totally fine and not the cause of my bleeding. Apparently, unexplained bleeding can be very common among multiples pregnancies. Just another one of those joys that you don’t know about until you know.

Around 28 weeks I started having severe pain in my back along with pretty regular Braxton Hicks contractions. I was already seeing my doctor very regularly due to being a high risk pregnancy so at an already scheduled appointment I asked her if bedrest was going to be required. She advised me that I was totally fine and just uncomfortable due to carrying two babies. I was told that while I should take it easy and limit the amount of walking, I didn’t need to go on full bedrest. 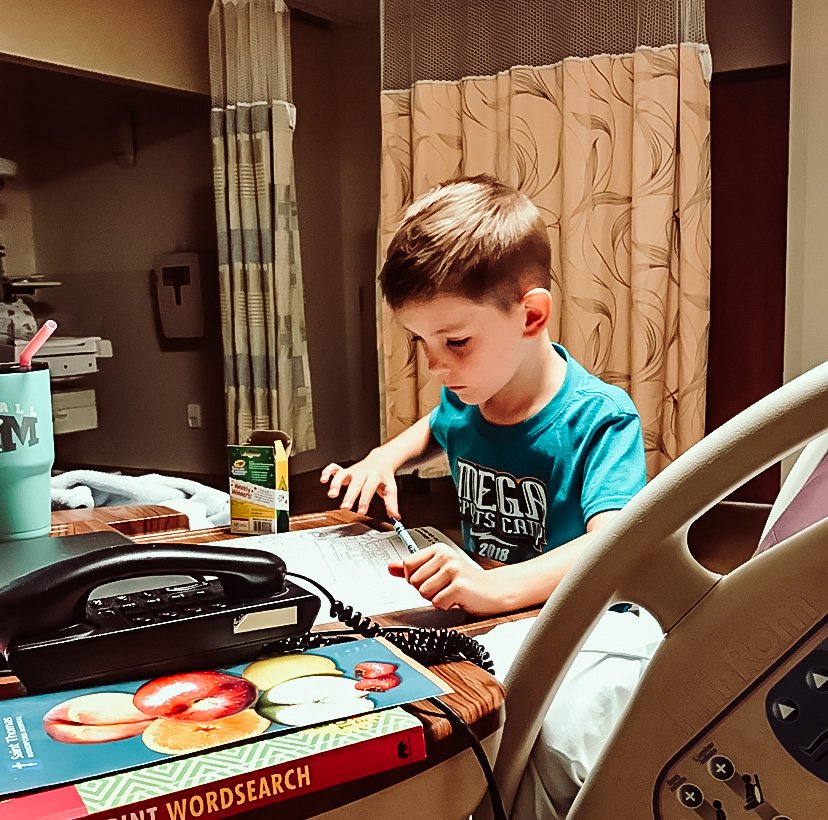 Daily visits to see mom in the hospital.

At 30 weeks and 6 days pregnant, I went to the bathroom, stood up to put my pants on and had a little bit of water leak down my leg. I brushed it off as just being urine because when my water broke with my oldest it was super obvious, like in the movies with the big gush of a waterfall, this wasn’t that. I woke up the next morning, just not feeling well. I had been up with cramping and uncomfortable most of the night. My husband and I decided we would take our son to school then head to the hospital just to be on the safe side, especially since my doctor’s office wouldn’t open for another couple of hours.

I filled out all of the paperwork at admissions and was taken to a room. Little did I know at the time, that room would be my home for the next three weeks! They checked my cervix, which was fine I was at a 1, which is where I stayed all the way up to delivery. They also did a swab to check for amniotic fluids which tested positive. The nurse looked at me when I got those results and said, “Well, you aren’t going anywhere until you deliver these babies.” I think my husband and I were both in shock. I mean, we had gone to the hospital knowing that it could mean the babies were on their way, but I think we both were more doing it as a precaution and fully expecting them to say, “Nope! False alarm, head home!” We were wrong. 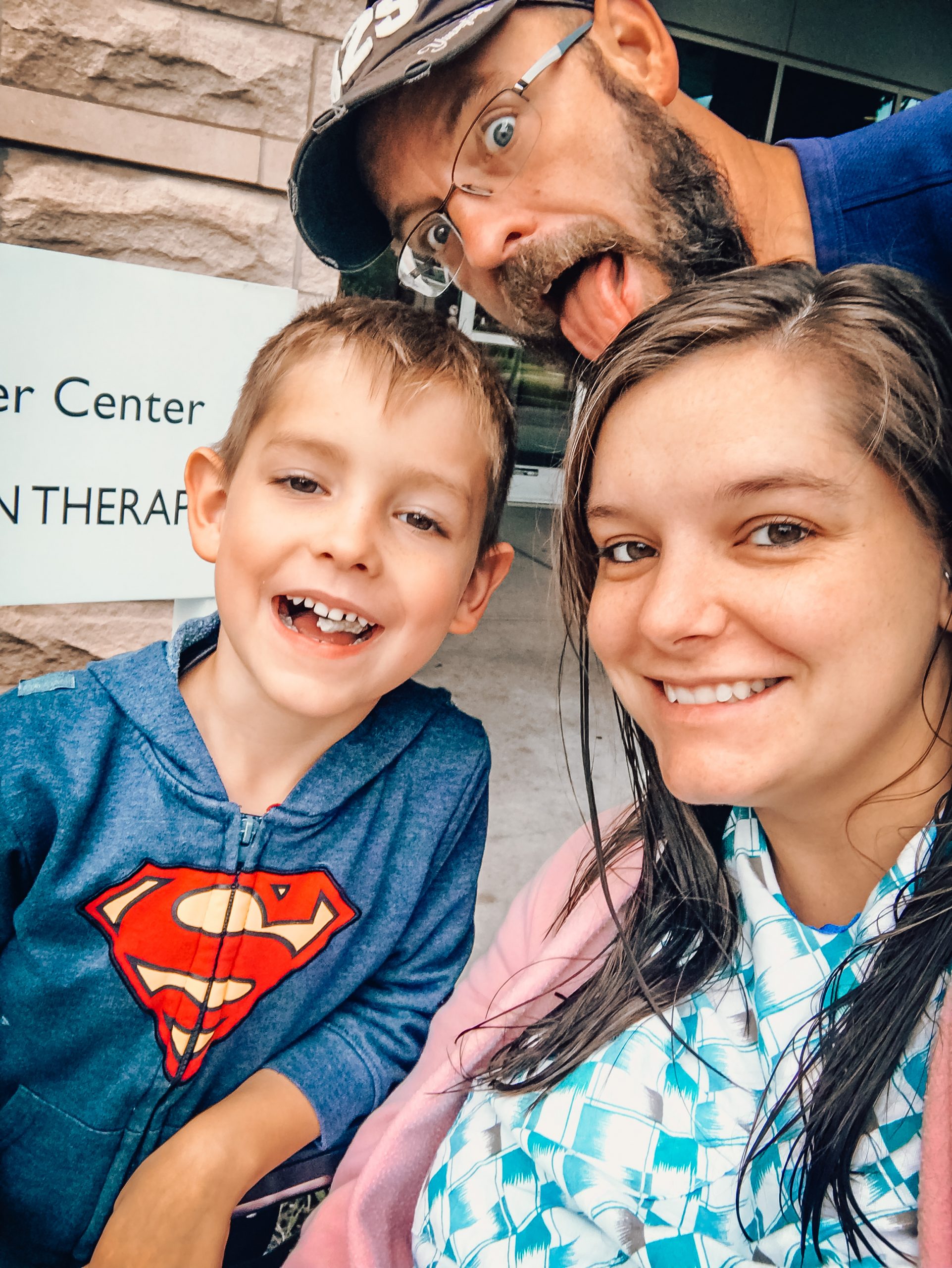 Hospital adventures while on bedrest for three weeks.

After three weeks of a rollercoaster ride of are we having them today, tomorrow, or three weeks from now? We finally made it to 34 weeks. This is the point in pregnancy where the risk of infection outweighs the risk of something happening to the babies by being premature. That meant it was time to schedule our delivery.

We had gone back and forth throughout my pregnancy, as to whether or not I should delivery via c-section or vaginally. It was my preference to deliver vaginally, as it’s all I had done before and I felt that it was best, but my boys kept changing their positions. In the days leading up to my delivery, I asked my doctor what was best for the babies delivery wise. She advised that she fully supported my decision whichever way I went, but depending how delivery went with how premature they were, c-section would probably be the easiest on them. Side note, my doctor was phenomenal and I fully trusted her input. To read more about how I find our physician’s click here.

I am a planner and also always always want what is going to be best for my babies. I decided that I would go ahead and proceed with the scheduled c-section, so that I didn’t have to worry about things changing. It was the route that was the fastest & easiest on my babies bodies, and we wouldn’t have the need for an emergency c-section which would be worst for all three of us. 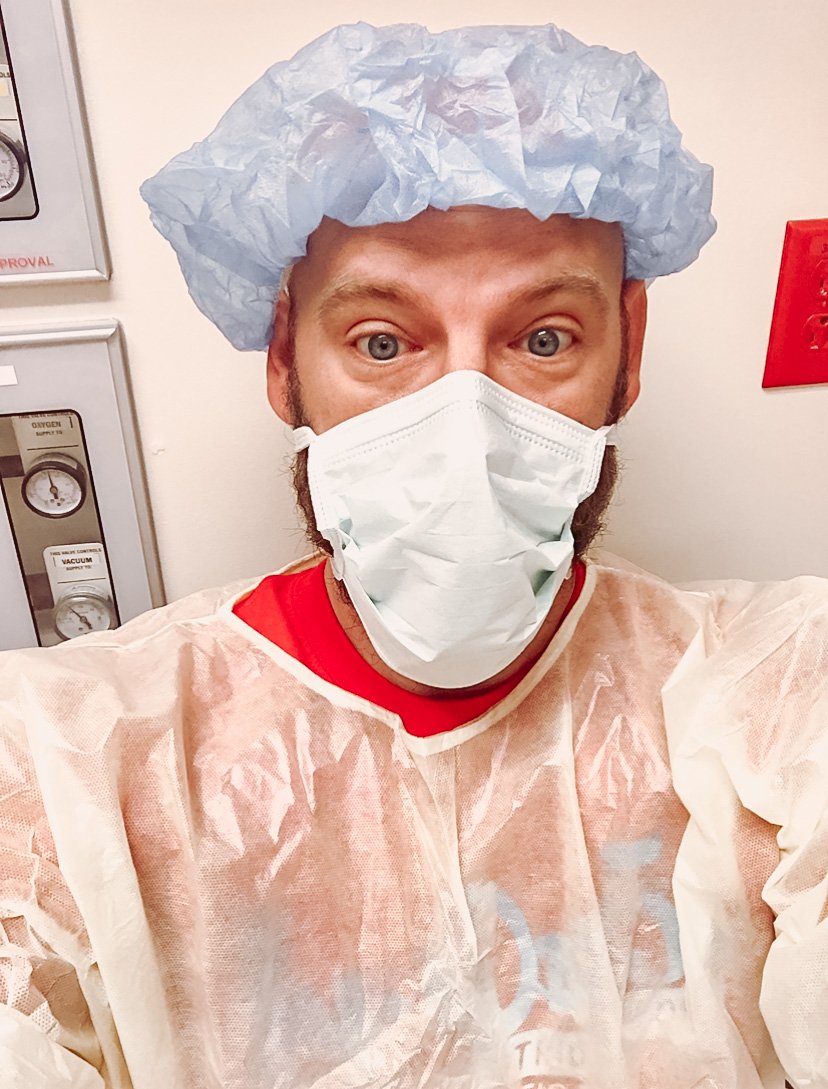 Waiting to be allowed in the operating room.

The morning of delivery came, and my IV blew (which by the way had just been replaced). So they had to give me a new one, which took three different people multiple tries each to finally get. Once they got me all prepped and ready to go, they wheeled me to the operating room, where Martin, my husband, waited just outside the door until I had received my spinal. Here we were again, they couldn’t get the spinal, my doctor stepped in and took the place of the nurse who had been bracing me because it had been so long and I think she could tell I was getting more and more uncomfortable and nervous. Let me first say, I’m not afraid of needles. I went through fertility treatments, and gave myself shots. I can sit there while someone else pokes me, but this was different. It does get exhausting and a bit disheartening when someone just can’t seem to get an IV and now they couldn’t even get the spinal block done. My doctor finally spoke up and asked that they call another anesthesiologist in to give it a try because it had been so long. Thankfully, that must have been just the push the original anesthesiologist needed because she got it right at that moment. 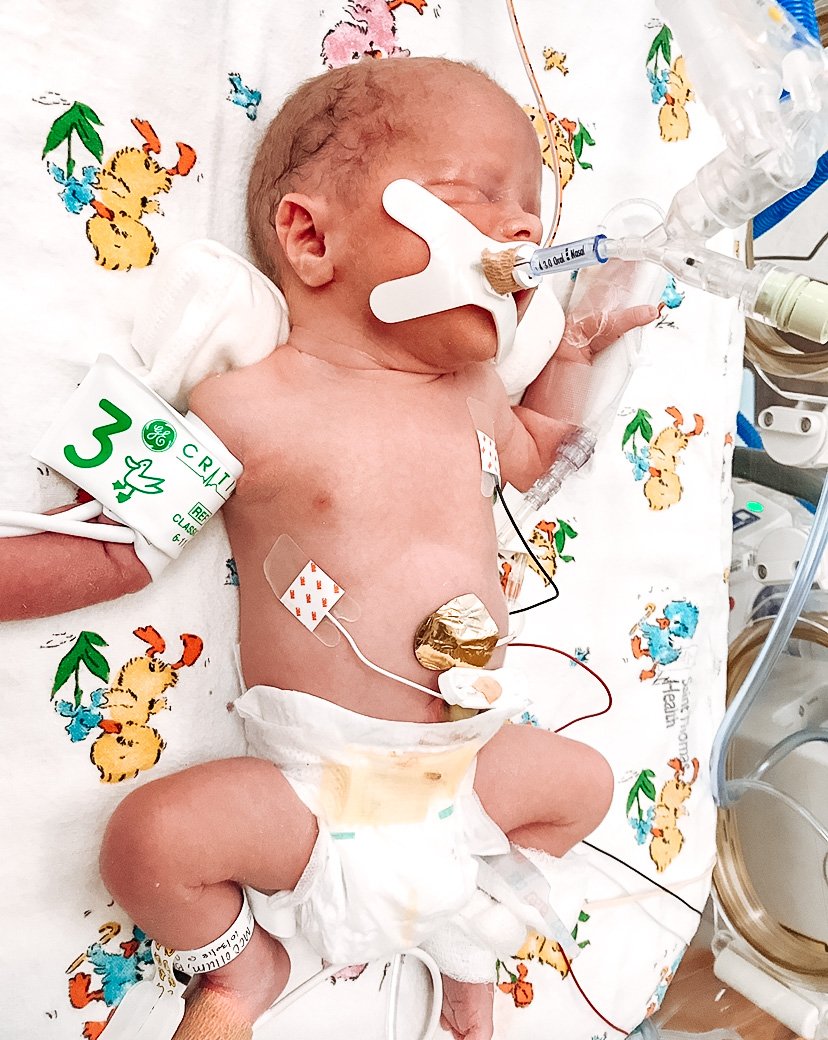 They quickly laid me down on the cold metal table, brought my husband in and began to cut. A few minutes later, came out our sweet baby A, Maverick. He was attempting to cry, but it wasn’t the strong cry I remember hearing when our son, Deklan, was born, or the cry you hear in movies. It was quiet and gurgly, it just didn’t sound right. They quickly whisked him over to where the NICU team was waiting. Exactly one minute later, came out baby B, Jamison, with the same cry but this time not quite as gurgly. Martin was allowed to go over to see the babies, but was quickly distracted as the nurses who were working on Jamison tried to keep Martin’s attention on him. 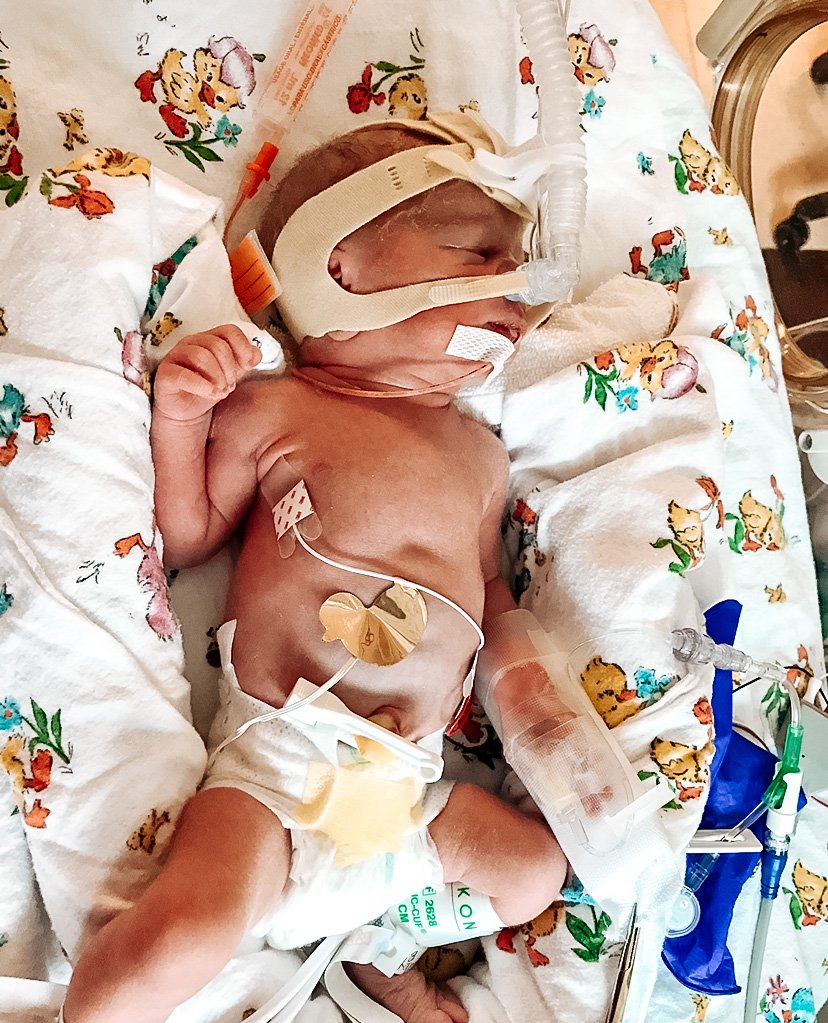 You see, Maverick had crashed and they had to quickly page the NICU doctor on duty while they rushed to try to save my sweet baby boy’s life. The nurse who was working on Maverick, later became our main nurse in the NICU and she later told me that he had given her a major scare during delivery. I tell you this, because doctors and nurses see these things all the time, so for her to have been that scared tells you just how bad my little Maverick must have been. Once they had revived him, he was rushed out of the room, thankfully the doctor who had just saved his life, caught them before they had completely left and had them bring him back in just for a second so that I could get a brief look at my boy from about 20 feet away. After I had seen him for that split second, off they went to get a chest X-ray.

Once I was all put back together, and was being wheeled out of the room to head to recovery, my doctor told me that it was a good thing I decided to go with the scheduled c-section because if I hadn’t done that it was likely that I would have lost both babies. Instead, they were both able to be saved and be healthy!!! Not only were they premature, but they both had their cords wrapped around their necks, and Maverick’s had a big knot in it. I thank God, I had made that decision because I may not have had either of my boys with me today if I had been stubbornly set on a vaginal delivery. 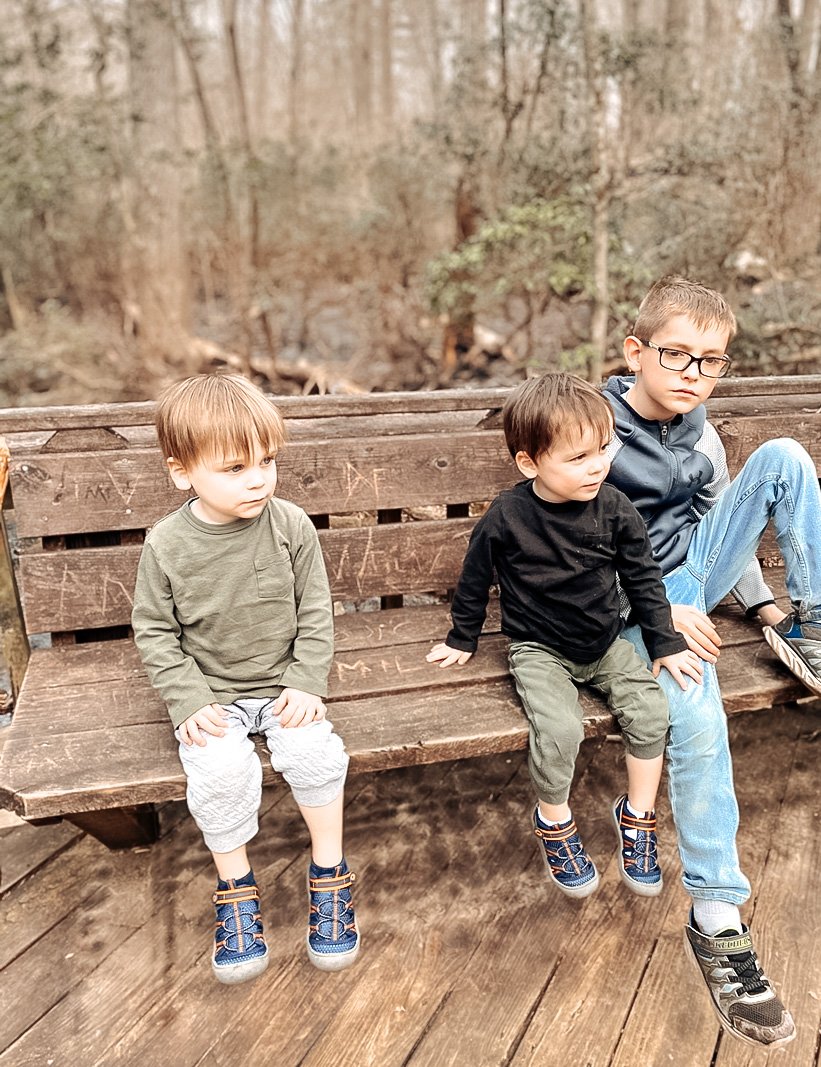 Moms spend so much time planning their birthing experience, but I urge you not to get caught up in birth plans. Don’t get so wrapped up in how peaceful or beautiful it can be, because majority of the time your baby is going to arrive how they want to arrive, and when you set expectations, they’re likely to be broken. I’m not saying you shouldn’t have a preference, because of course you will, there’s a reason there are so many options available and you have to do what feels best for you and your family, but don’t lose sight of what really matters. And don’t forget that it doesn’t matter how your baby comes into this world. When they’re 5 and out there on the t-ball field or 22 walking across a stage at college graduation, I promise you, the way they were delivered is not going to be at the forefront of any conversations they will ever have. I guess I’m just saying, have a plan but also remember that a lot of times our kids don’t let us keep our plans. If you’re a first time parent, let this be your first major lesson; YOUR KIDS ARE GOING TO DO WHAT THEY’RE GOING TO DO. 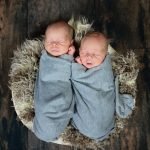 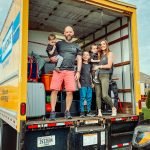 Next Story
What to Expect When Moving with Kids